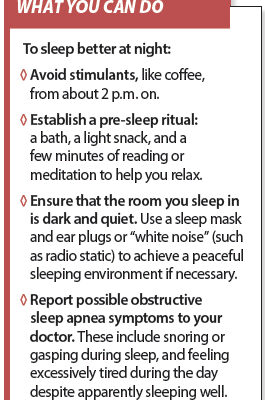 Previous research has shown that poor sleep may put people at greater risk for a range of chronic conditions affecting heart and brain health. Studies also have shown that sleeping too much or too little may raise the risk for cardiovascular disease (CVD). With this in mind, the American Heart Association (AHA) recommends that adults aim for an average of seven to nine hours of sleep a night. If you’re getting less than that amount of sleep, you may be tempted to make up the shortfall with regular daytime naps—but two recent studies point to a possible association between napping and a greater risk of CVD, high blood pressure, and stroke. If you enjoy a daily nap, should you worry about these findings? No, says Harrison G. Bloom, MD, associate clinical professor of geriatrics and palliative medicine at Mount Sinai. “The association likely is due to poor overnight sleep—after all, people who don’t sleep well at night tend to be the ones who need naps during the day,” he says. “Additionally, both studies relied on self-reported information, which often is not accurate.” But even if naps are a safe way to catch up on lost sleep, Dr. Bloom says it’s a good idea to address what is disturbing your overnight slumber.

The first study we reference (Journal of the American Heart Association, Aug. 2, 2022) included 12,268 adults, average age 70, none of whom had a history of major cardiovascular events. They filled in a questionnaire that asked how long they typically slept at night, whether they napped during the day, and if they had any symptoms that might indicate a sleep disorder—for example, insomnia (difficulty falling and/ or staying asleep), or snoring. The latter can be a sign of obstructive sleep apnea, a condition in which breathing briefly stops during sleep, often multiple times per night (see our cover article on CPAP machines for more on this).

Other recent research (Hypertension, September 2022) examined whether frequent naps could be a risk factor for high blood pressure and/or stroke. After excluding people who had already had suffered a stroke or had high blood pressure, researchers focused on 358,451 people who selfreported their nap frequency and were followed for about 11 years. The participants were divided into groups based on whether or not they napped and their napping frequency if they did nap. Compared with people who never napped, those who usually did were 12 percent more likely to develop high blood pressure and 24 percent more likely to suffer a stroke. 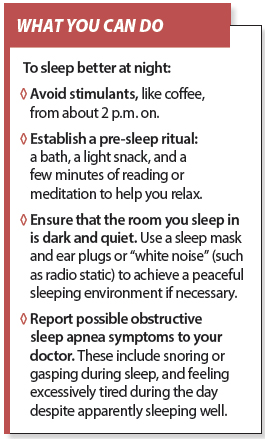 Dr. Bloom notes that a greater percentage of frequent nappers reported cigarette smoking and daily consumption of alcohol, both of which increase the risk of high blood pressure and stroke. “Also, the researchers did not collect information on nap duration, so we don’t know if the length of daily naps increased the risks of high blood pressure or stroke,” he adds.

Why Is Poor Sleep Harmful?

Cameron S. McAlpine, MD, assistant professor of medicine/cardiology at Mount Sinai, points to inflammation as a possible factor underpinning the link between poor sleep and CVD. Inflammation is part of the healing process—your immune system’s first line of defense against infection and injury. But inflammation can become chronic, resulting in a continuous flood of pro-inflammatory chemicals and immune cells that damage blood vessels, organs, and joints. “We know that inflammation contributes to CVD,” Dr. McAlpine says, “and studies suggest that poor or inadequate sleep increases inflammation.” Like Dr. Bloom, Dr. McAlpine does not see napping in itself as a cardiovascular risk factor. “Napping can have health benefits, particularly if you do not sleep well during the night,” he confirms.

You may be able to sleep better at night through what has become known as “sleep hygiene”. “If you still feel tired during the day despite better overnight sleep, schedule naps early in the day so they don’t interfere with overnight sleep,” Dr. Bloom advises. “Also try to resist the urge to nap for longer than 30 minutes or so.”

The post No Need to Nix the Nap appeared first on University Health News.

Read Original Article: No Need to Nix the Nap »

Previous: Sleep Better at Night
Next: Diabetes Can Affect Your Skin