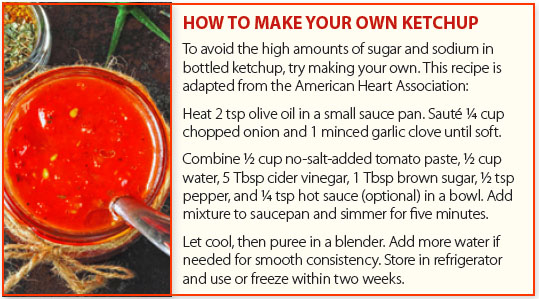 If you’ve been congratulating yourself for eating healthy entrees and side dishes, make sure you’re not negating those smart choices by slathering them with less-healthy condiments such as ketchup, mustard, barbeque sauce, hot sauce, or mayonnaise.

“Condiments can be a convenient way to add more flavor to everyday foods that can sometimes get boring or redundant,” says Rachel Lustgarten, a registered dietitian nutritionist with Weill Cornell Medicine. However, it is important to be aware of the additional calories, sodium, sugar, fat, and additives and preservatives that condiments can add.

Many people closely monitor food intake but disregard additions like condiments. Condiments are usually added to food as a last step before eating, and are often slathered on heavily. As a result, they are less likely to be carefully measured and monitored.

Avoid or Reduce These

Some condiments should raise red flags simply by their appearance; if they look rich and decadent, they probably are. “Creamy condiments such as sour cream, mayonnaise, and salad dressings such as Caesar and ranch, are high in calories and fat,” says Lustgarten. “Fatfree salad dressings often contain added sugar in place of the fat to add flavor.” Tartar sauce is another creamy choice to limit—high in sodium, added sugar, and calories. Similarly, while horseradish on its own is fine, horseradish sauces add sugar, sodium, and saturated fat.

You might be surprised, however, at the unhealthy ingredients lurking in your favorite hamburger or hot dog toppings. Lustgarten cautions, “Ketchup, honey mustard, teriyaki, and barbeque sauces are hidden sources of sugar.” A tablespoon each of ketchup and mustard can also add more than 300 milligrams of sodium to your burger or frank. Regular mustard has less added sugar than honey mustard, but may be higher in sodium. Mustard also often contains turmeric, whose main component (curcumin) has been shown to have anti-inflammatory effects, but you’re unlikely to consume enough to benefit.

Hot sauce can add a flavorful zing with just a few dashes, and soy sauce brings Asian flavors to dishes—but don’t overdo either. “A little goes a long way with hot sauce and soy sauce, which are very high in sodium,” Lustgarten explains. “One tablespoon of soy sauce contains almost half the daily recommended intake of sodium!” Steak sauce, Worcestershire sauce, and especially teriyaki sauce are likewise loaded with sodium. So is cocktail sauce, despite its tomato-y appearance.

The peppers used to make hot sauces may help speed up your metabolism, and their fiery kick can help satiate your appetite. Check labels, however, as ingredients vary widely, with some brands incorporating healthy carrots while others pack in artificial preservatives.

Besides simply using less, Lustgarten suggests making some smart substitutions to your condiment selections. “If you are worried about sodium, try adding flavors that are minimally processed, such as infused oils, mashed avocado, hummus, vinegar, and homemade salsa. Look for healthier versions of favorite condiments, such as lowfat or fat-free mayo, low-sodium soy sauce, and salsa and ketchup made without high-fructose corn syrup.”

Lustgarten also suggests, “Try condiments that are high in flavor such as Parmesan cheese and sriracha, which can be consumed in small amounts. Also, mix your own salad dressing combinations to best control the ratios of oil to vinegar and limit added fat.”

Products made from low-fat yogurt, such as salad dressings and tzatziki sauce, are also smart choices. Tzatziki can be used as a spread or dip, adding bright lemon, onion, and garlic flavors to foods. Yogurt also makes a tangy substitute for higher-fat sour cream.

Instead of jarred salsas, make your own from fresh tomatoes or tomatillos, peppers, onions, and garlic; lightly char the veggies under the broiler for depth of flavor. Or try pico de gallo, an uncooked salsa made with tomatoes, onions, jalapeños, and lime—it’s low calorie, low fat, and rich in nutrients.