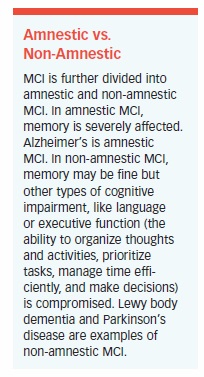 Memory loss results from the deterioration of the hippocampus, the area of the brain vital to memory formation. The hippocampus degrades with age, but it also is susceptible to many other factors, including chronic stress, blood sugar imbalances, and poor diet.

Degeneration occurs when the neurons in the brain begin to lose the ability to communicate with one another. Neurons depend on this communication to stay healthy and active.

In the case of Alzheimer’s, abnormal tau proteins—proteins that stabilize microtubules, which help maintain the structure of a cell—form tangles inside the neurons. Communication becomes impaired and plaque develops outside of the neurons, causing neurons to die and the brain to shrink. Gradually, this degeneration and shrinkage spreads beyond the hippocampus to other areas of the brain, so that more than just memory is affected. Cognition, emotion, motor function, the ability to plan, and basic body functions start to deteriorate.

The goal with managing memory loss naturally is to:

Although diet and lifestyle ultimately determine your risk level, we can’t ignore genetic risks. Possessing the genes that predispose you to mild cognitive impairment (MCI) or Alzheimer’s does not guarantee the disease’s onset, although preventive action can stop those genes from triggering. If MCI or Alzheimer’s runs in your family, view it as a red flag that you need to be extra vigilant about taking steps to maintain brain health. 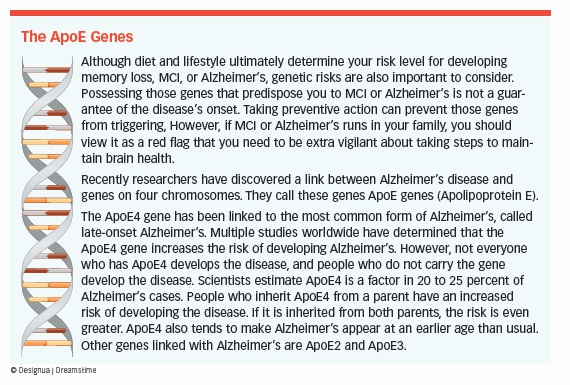 Some people have what are called “deterministic genes,” which guarantee you will develop a disease, such as Alzheimer’s. Before you become concerned, however, the Alzheimer’s Association states that only 1 percent of Alzheimer’s cases are caused by these genes (see “Deterministic Genes”).

When it comes to preventing dementia symptoms and Alzheimer’s, being female significantly increases your risk of developing Alzheimer’s later in life. Of the 5.8 million Americans living with Alzheimer’s disease, two-thirds are women. 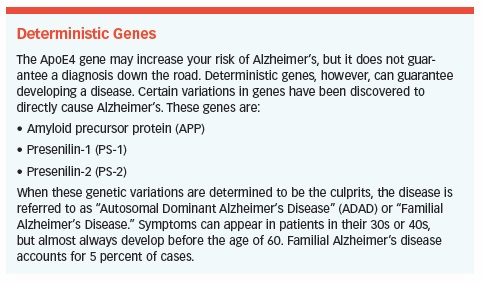 The statistics surrounding MCI can be contradictory. Some studies show there is no statistical difference between the prevalence of amnestic MCI in women and men, although women have a higher prevalence of non-amnestic MCI. Other studies show that men have a greater risk of developing any form of MCI. Regardless, of those who are diagnosed with MCI, the research is clear that a woman’s disease progression is much more rapid. That is, cognitive and functional abilities decline faster in women with MCI than men.

Although some researchers suggest that the trend is due to women living longer than men, studies show that hormones play a strong role in brain health, especially estrogen, a hormone the female brain desperately needs to function properly.

Many women suffer from hormonal imbalances well before they reach middle age, as evidenced by the rise in premenstrual syndrome, polycystic ovary syndrome (PCOS), and infertility. When a woman who is already hormonally imbalanced enters perimenopause—the transitional stage between menstruation and menopause—her estrogen levels fluctuate and her risk for neurodegeneration, memory loss, dementia symptoms, and Alzheimer’s rises.

Estrogen facilitates healthy brain function. Although it isn’t painful, brain inflammation can cause brain fog, memory loss, feeling “spaced out,” fatigued, and irritable. These symptoms are the result of inflammation disrupting communication between brain cells, which causes degeneration of brain tissue. Estrogen also preserves cognition and spatial memory, helping you remember things like where you left your car parked.

As estrogen levels decline, women may experience a decline in their fine motor skills, which would make activities such as embroidery more difficult. Estrogen helps neurons grow new dendritic spines, which help neurons communicate with other neurons. Estrogen also ensures appropriate levels of glutathione, a potent antioxidant, and skews the balance of fatty acids to become pro-inflammatory, even if a person has a healthy diet.

Taken together, it’s easy to understand why the declining and fluctuating estrogen levels that often accompany perimenopause and menopause create a series of risk factors for dementia symptoms and Alzheimer’s disease.

Because the adrenal glands begin to compensate for the ovaries during perimenopause and menopause, adrenal support should be a top priority for women. Implementing sufficient adrenal support involves a multi-faceted approach that includes removing food intolerances; balancing blood sugar with a lower-carb, whole-foods diet; and resolving chronic infections and inflammatory conditions.

Because so many women enter this stage of their life with compromised adrenal function, bio-identical hormone therapy (under the guidance of a qualified health-care practitioner) can help preserve brain health. Studies show an inverse relationship between estrogen replacement therapy and the incidence of Alzheimer’s disease.

The frontal lobe of the male brain contains many receptors for the hormone testosterone. When testosterone is low, loss of cognitive function, memory problems, and the progression of dementia symptoms can occur. Less advanced symptoms may include depression, lack of motivation, loss of libido, and a “grumpy” attitude. 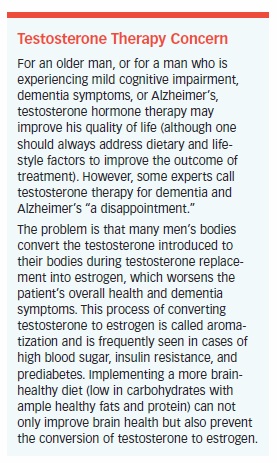 Low testosterone can cause:

For many men, an easy solution to low testosterone is using testosterone cream. But these products can make things worse—especially in younger men who are capable of restoring hormone function naturally.

Although bio-identical hormone therapy may be appropriate in some cases, for many men, low testosterone is the result of chronic insulin surges, due to a diet high in sugars and carbohydrates. Food intolerances, poor digestive function, chronic inflammation, and junk foods all create chronic body stress. This kind of stress lowers testosterone levels and raises the risk of dementia symptoms and Alzheimer’s. Instead of immediately using a prescription testosterone cream, men should first attempt to balance their blood sugar and reduce inflammation. These natural, health-promoting steps may restore testosterone activity to healthy levels.

Previous: From The Medical Editor
Next: 3. Stages of Dementia