Unless you live in Alaska, Hawaii, a desert, or at a high altitude, poison ivy is creeping around nearby. If you don’t stay away from it, you may be one of the 50 million Americans affected each year.

Poison ivy, poison oak, and poison sumac all contain an oil called urushiol. It can cause an allergic reaction in the form of a blistering rash and an impossible-to-ignore itch. The poisonous plant presents three problems: recognizing it, treating it, and avoiding it.

Poison ivy’s basic summer appearance is a vine or shrub that has green, three-leaf, pointed clusters (“Leaves of three, let them be”). It can appear as ground cover, upright in bushes or shrubs, or as vines that grow up trees or rock walls. Several other plants (box elder, raspberries, blackberries) have a similar appearance.

How Is Poison Ivy Treated?

Poison ivy is a year-round nuisance, but it’s especially toxic in spring and summer. A nick or quick brush against the plant is all it takes. Its symptoms—a red rash, blisters, and itching—can appear within a few hours of exposure or as long as 12 days afterwards. Without treatment, the symptoms go away in two to three weeks. 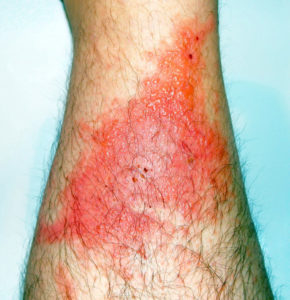 If you’ve been hit hard by poison ivy, then you know the agony this type of serious rash can cause.

If you know you’ve come into contact with poison ivy, flush the skin with lukewarm, soapy water as soon as possible (every minute counts), says the American Academy of Dermatology. Then do it again. Don’t scratch, and don’t break the blisters when they appear.

Oral antihistamines can relieve itching, as can wet compresses and short baths in warm or cool water. Over-the-counter topical corticosteroid preparations might help, or you might try trade-name products such as Calamine Lotion or Aveeno.

See a doctor or go to emergency room if:

A Bit of Good News

There is some good news regarding a mostly-bad-news situation. The rash you get from poison ivy is not contagious and does not spread. It might appear to be spreading, but it’s because of a delayed reaction to urushiol in the areas of skin affected.

How Can You Prevent Poison Ivy Exposure?

If you’re going to be working near poison ivy, wear long sleeves and pants tucked into garden boots. Use gloves that don’t allow fluids, including oils, to pass through. It’s a good idea to wash any item of clothing that has been in contact with poison ivy, and regularly wash garden tools.

If you have a dog who may have brushed against a poisonous plant, use pet shampoo to wash the dog. Pets aren’t sensitive to the oil, but if it gets on their fur and you touch it, you’ll have a reaction.

Also, don’t put poison plant leaves in a campfire or when burning leaves in your yard. Urushiol can go airborne. 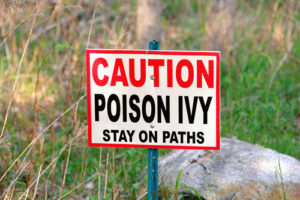 Take precautions in your clothing if you’re outdoors—long sleeves, as well as long pants tucked into your boots. And heed warnings like this one.

Poison ivy can be easily pulled out in early spring if only a few plants are involved. Pull out the entire root system, if possible, and put it in a plastic bag to be taken away.
When poison ivy has been in an area for a long time, it is almost impossible to remove the plant and its root system. The best way to protect yourself is to stay away from it.