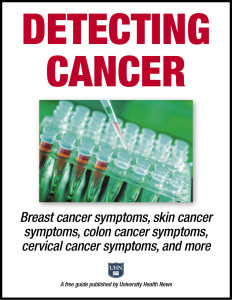 Leaky gut has been associated with a wide range of disorders, among them asthma, food sensitivities, psoriasis, allergies, and inflammatory bowel diseases. But what is leaky gut?

At its most basic, leaky gut is like having large holes in what is supposed to be tighten woven fabric. The holes allow particles—such as toxins and harmful bacteria—that would normally be eliminated from the body to enter the bloodstream, where they can create health problems.

“In our gastroenterology practice, we use the scientific term ‘intestinal permeability,’” explains gastroenterologist Guy A. Weiss, MD, UCLA Celiac Disease Program Leader, Department of Digestive Diseases. “It refers to a dysfunctional epithelial barrier [gut lining], which may expose our immune system to bacteria and food allergens and result in inflammation. At the same time, intestinal permeability is also the direct consequence of gut inflammation and the abnormal function of the proteins that keep the cells in our gut close together.”

The medical community is just beginning to understand the health problems that may be associated with leaky gut and why. To explain the condition, we’ll start with zonulin, a protein that controls gaps in our gut lining.

Learn how to recognize cancer warning signs and make the best decisions for care and treatment.

Zonulin is a type of protein referred to as “tight junction regulator,” because it controls the size of the gaps between the intestinal cells. It also manages the passage of nutrients, water, and cells into and out of the gut.

Scientists have found that zonulin is produced and released by triggers such as intestinal bacterial infections and gluten (establishing a link between zonulin and celiac disease). In the presence of zonulin, the normally tight junctions between intestinal cells remain open. On the positive side, this function of allowing particles to pass through can rid the body of pathogens. But too much zonulin (as a response, for example, to gluten in those with celiac disease) creates bowel leakiness and starts an inflammatory cascade that eventually damages the intestinal wall.

At the 23rd United European Gastroenterology Week, held in 2015, Italian scientists announced the results of their latest research linking zonulin with two common inflammatory bowel conditions. They found that blood levels of zonulin were almost as high in patients with non-celiac gluten sensitivity as in those with celiac disease.

“While complementary medicine practitioners often measure the levels of antibodies against zonulin, this new small study is the first to suggest that zonulin expression is also elevated in non-celiac gluten or wheat sensitivity, and to a lesser extent in irritable bowel syndrome, IBS, diarrhea predominant,” says Dr. Weiss. “Although further studies are needed, zonulin might possibly become a biomarker of non-celiac gluten or wheat sensitivity in the near future.”

An Elimination Diet to Pinpoint Food Sensitivities and Allergies

A short-term elimination diet can help clarify which foods might be causing digestive distress. These are typically done under a physician’s or registered dietitian’s supervision. The approach is to remove suspected foods for a few weeks then assess how you feel. Common food allergens include eggs, gluten, dairy, soy, citrus, and corn.

Once common allergenic foods have been eliminated for a few weeks, it’s time to reintroduce them and assess for reaction. “Add one allergenic food back in at time,” recommends registered dietitian Dana Hunnes, Senior Dietitian Adjunct Assistant Professor, Fielding School of Public Health at UCLA Medical Center, “otherwise, you cannot delineate which is the problem food.”

In patients with celiac disease, the presence of gluten causes the tight junctions to remain open, thus starting an inflammatory cascade within the bowel that eventually destroys intestinal villi, the small finger-like structures that aid in nutrient absorption. Research suggests larazotide acetate may help keep the tight junctions closed when ingested prior to a meal, thus reducing the inflammatory process in response to gluten.

Larazotide acetate has the potential to become the first approved medicine to treat celiac disease and has been granted “Fast Track” designation from the FDA, a process that expedites the review of drugs to treat serious conditions that fill an unmet medical need.

The bacteria that naturally live inside the stomach and on the body are collectively referred to as the microbiome. A healthy and diverse microbiome is important for gut and overall health.

With age, however, that diversity can dwindle. It’s therefore especially important to eat a wide variety of fruits and vegetables, as well as probiotic foods. Probiotics (a good type of bacteria) have been found to be helpful in alleviating symptoms of irritable bowel syndrome (IBS). Kefir, yogurt, and kombucha (fermented tea) are sources of probiotics.

“Because the levels of live bacteria may be too low in some of these products, and they are not standardized, investing in a probiotic pill or powder can also be beneficial, says Hunnes, “Lactobacillus GG is the most commonly studied probiotic, so purchasing a probiotic with this among its bacteria is a good idea.”

Whether it’s an elimination diet or adding more probiotics to create better gut health and avoid conditions like leaky gut, it’s wise to know what works and what doesn’t according to each person’s specific symptoms.

As for gluten, it’s never too late to be tested for celiac disease. “Gluten-associated inflammation directly leads to intestinal permeability,” says Dr. Weiss. “I recently diagnosed a 79-year-old patient who suffered from symptoms for more than two decades and was misdiagnosed with IBS.”

Knowing the cause of the symptoms leads to more appropriate and more effective treatment options.

Previous: Expecting moms ease the load with new aerial yoga class – MyStatesman.com
Next: Of Pain and Purines: Lower Your Uric Acid to Ward Off Gout Flare-Ups