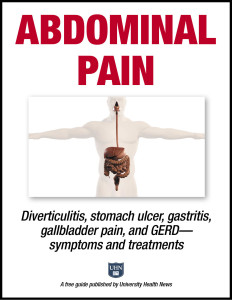 What is ulcerative colitis? Simply put, it’s a condition that causes inflammation and ulcers in the inside lining of the large intestine (rectum and colon). It affects just the top layer of the intestinal lining (called the mucosa).

Crohn’s disease also causes inflammation, usually in the small intestine, but it can affect all areas of the gastrointestinal tract (mouth to anus). Crohn’s disease affects all four layers of the intestinal wall.

Crohn’s and colitis are the principle disorders of inflammatory bowel disease (or IBD). The cause of IBD is unknown, but some interaction between hereditary factors, environment, and the immune system is probably at work. It’s theorized that the body’s immune system reacts inappropriately to viruses or bacteria in the intestines.

The immune system mistakes these for foreign invaders and launches an attack by sending white blood cells to the intestinal lining. This produces inflammation that becomes chronic, damaging the intestine. This reaction is thought to occur in people genetically predisposed to IBD.

The main symptoms of ulcerative colitis are cramp-like abdominal pain on the lower-left side and bloody diarrhea. Loss of appetite, weight loss, nausea, anemia, and fatigue also are common.

Crohn’s symptoms vary depending upon severity and which part of the intestine is affected, but generally include abdominal pain, diarrhea, and bloating.

People with either type of IBD also can have symptoms outside the digestive system, such as joint inflammation (arthritis), eye inflammation, or skin, liver, or kidney problems. These symptoms are probably caused by the abnormal immune system response in these patients.

To diagnose IBD, the doctor will start with a medical history, physical examination, and a series of tests, including blood tests and analysis of a stool sample. If ulcerative colitis is suspected, the next step will be flexible sigmoidoscopy or colonoscopy, which allows the doctor to visualize the interior of the large intestine and take tissue samples for laboratory analysis.

If Crohn’s disease is suspected, the doctor may perform an upper GI series to look at the small intestine, or an endoscopy or capsule endoscopy. The doctor may also do a colonoscopy. 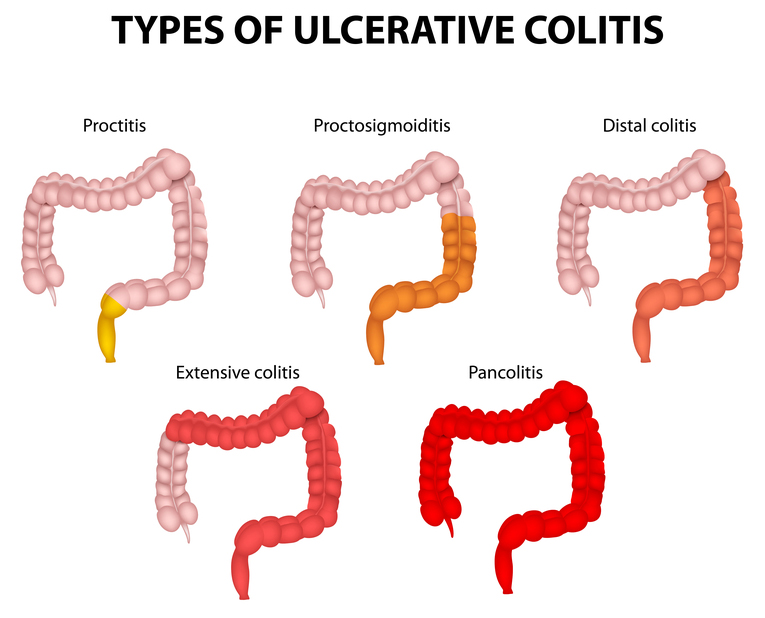 Excellent nutrition is critical for IBD patients (especially those with Crohn’s), who have difficulty absorbing nutrients from food. Dietary supplements may also be needed. Although emotional stress does not cause IBD, it may trigger flare-ups so managing stress in your life may help control it.

Anti-inflammatory drugs known as 5-aminosalicylates are the first line of treatment for mild to moderate IBD (both Crohn’s disease and ulcerative colitis.) They help as maintenance medications to prevent relapses.

Patients with more serious illness or flare-ups may require corticosteroids, like prednisone and hydrocortisone. Because of the serious side effects, corticosteroids are only for short-term use. Drugs that blunt the immune response are the third line of defense and are safer for long-term use. However, they can take up to three months to take effect. These medications include azathioprine (Imuran), 6-mercaptopurine (6-MP), and cyclosporine.

The newest drugs for IBD are biologics, genetically engineered compounds derived from human genes that inhibit aspects of the immune system. They have a more targeted action than corticosteroids, which minimizes side effects. The first biologic used to treat severe Crohn’s was infliximab (Remicade). Another in wide use is adalimumab (Humira). It works for moderate to severe Crohn’s disease that has not responded to other drugs.

Surgical removal of the affected portion of the small intestine or colon may be necessary for advanced disease. About 25 to 40 percent of people with ulcerative colitis will eventually have surgery. The main procedure for ulcerative colitis is a proctocolectomy, where the entire colon and rectum are removed. Many patients are able to have the restorative version, which replaces the colon and rectum with a pouch that allows them to have normal bowel movements.

Others will require an ileostomy, in which an opening in the abdomen is created to allow stools to pass out of the body. Ulcerative colitis is cured by this surgery.

Two-thirds to three-quarters of patients with Crohn’s will require surgery at some point and entails removing diseased portions of the small intestine. This surgery is limited because the small intestine is essential for adequate nutrient absorption, so only small amounts can be removed. If Crohn’s disease affects the large intestine, a proctocolectomy can be performed. Surgery does not cure Crohn’s as the inflammation can reappear in a previously unaffected portion of the intestine.

Regular colonoscopies with biopsies are required to monitor the state and progression of IBDs.

The post What Is Ulcerative Colitis? And What Is Crohn’s Disease? appeared first on University Health News.

Read Original Article: What Is Ulcerative Colitis? And What Is Crohn’s Disease? »

Previous: Top 5 Fatigue Causes: Understanding Why You’re So Tired
Next: Ice or Heat? For Back Pain, It Depends